BASEBALL TRYOUTS FOR 495 WOLFPACK OWNED BY ASSOCIATE SCOUT FOR CUBS 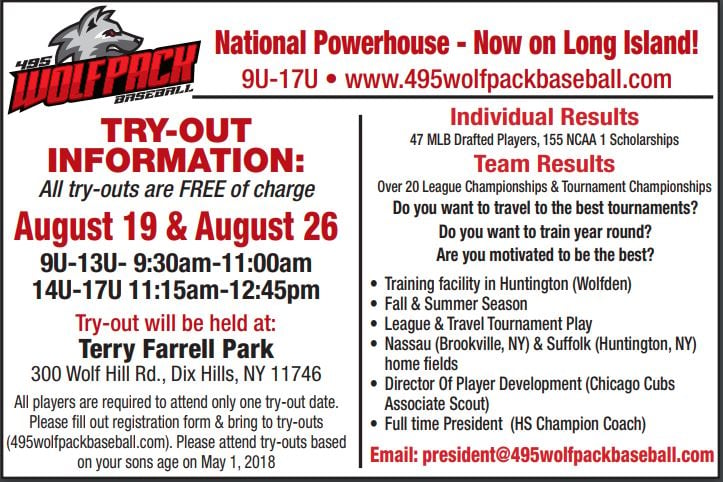 "We were looking to expand our team to Long Island and loved the CGI Braves philosophy and player results. Rob Steinert was a teammate and is a friend. Together we will grow this program into a nationally recognized program. Rob is the best pitching instructor in the country says Shawn Senior.

His results of 42 players drafted, 155 NCAA D1 scholarships and 300 NCAA players are un-heralded. In addition, his position as a Chicago Cubs associate scout adds credibility to the Wolfpack name. The Long Island extension of the Wolfpack will be the “495 Wolfpack.”

Rob Steinert agrees. "One of my greatest passions is to develop individual player’s talent. Now we have a platform to take the top players and make them even better. We now have the ability to compete on a regional and national stage where college coaches will attend our games and work-outs, looking for the best of the best. I am very proud of what the CGI Baseball and the CGI Braves program has built and I look forward to our new chapter as the Wolfpack at our new training center the Wolfden.“

Together Rob Steinert, Michael Tinney and Shawn Senior wanted to find a training facility to help the 495 Wolfpack players train and develop even more during the long winter months.

"We are proud to announce the 495 Wolfpack will train at the premier Winners Edge Sports Training location (separate from all WEST programs). This location is just 1.5 miles away from CGI Baseball. In addition to the newly renovated four full length batting cages, the 115x55 "Spinturf” field is the top indoor field in Suffolk County. This field will allow the 495 Wolfpack fielders to field live ground-balls during the winter, allow infielders/outfielders and pitchers to long toss and take their speed & agility program to elite levels. This facility will provide the 495 Wolfpack players with the finest training Long Island has to offer. We call this the “Wolf Den”.

Many of the CGI staff members will remain, while the philosophy will shift to tie into the dominant Wolfpack principles. The quest to be the best is the slogan behind the Jersey Wolfpack and we will use that here on Long Island. The 495 Wolfpack will attend top tournaments and will continue to look for serious players that want to win and showcase their skills.

The combination of player development and regional success is going to lead the 495 Wolfpack teams to the top. Co-owners Rob Steinert and Shawn Senior are excited for this next chapter.

Hi! I am so excited and happy to be your new publisher for Macaroni Kid in Huntington, Melville, and Dix Hills. I was always a big fan and now I have the opportunity to connect to the community and share family friendly ideas, events, and anything of interest to my readers. I am the publisher, but I ask for and welcome any and all suggestions on how we can continue to make this web site a true and valuable resource for our families, neighbors, and friends. I am an educator by training and have spent mos…